January 29th was the start of my 7th Arrowhead Winter Ultra 135.  After getting up to International Falls last year on Saturday, instead of Sunday, I decided that was the way to go.  Much less rushing and this provided me the opportunity to check out the trail on Sunday, versus going in blind.  From my recon the course was looking firm and fast.
I was more nervous for this Arrowhead than previous.  Many people were wishing me well and telling me they thought I had a chance at winning...pressure!  Maybe it's because I suffer from anxiety but I try not to think about that.  I always go into races with a "whatever" attitude.  But damn I was nervous for this one! 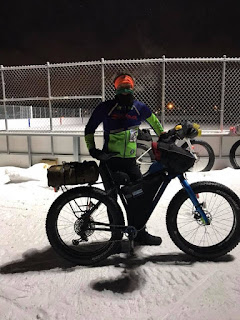 The start was chilly, -12, but not darn right cold.  It was predicted to warm up to maybe 0 and hover there before dropping down to maybe -10...perfect for a sweater like me.
It was a fast start.  JayP , per usual, got to the front and hammered.  I am grateful for this.  It thins the heard and makes the group a manageable size.  Within in a mile it was Jay, Steve Cannon, and I.  Before the turn off the Oxbow Trail (9-10 miles) it was just JayP and I.  I was feeling good, the nerves were gone, and excited for a day of riding bikes. 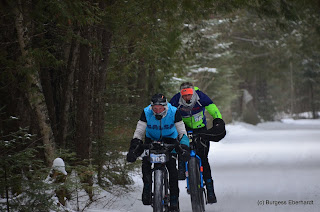 JayP and I taking turns up front.
Photo Credit: Burgess 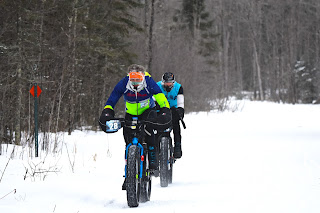 See!  I did pull some!
Photo Credit: Dave Markman
As you can see in this photo we are bit more frosted over!  It was chilly.

The first checkpoint is Gateway around 35 miles or so.  I was starting to feel a bit of fatigue but nothing to worry about.  I was feeling good and ready to tackle the next leg to MelGeorge's (mile 75).  We got to Gateway a bit behind last year's record setting pace.  The course was fast but only having two in the main group kept the pace down a bit and cold temperatures can make the snow more Velcro like. 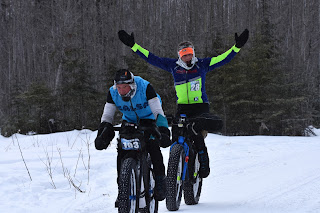 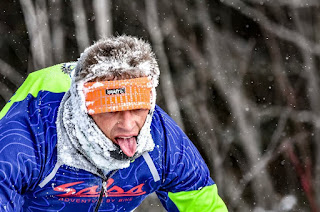 After leaving Gateway the trail turns from mostly flat to mostly rollers.  No more than the second set of rollers it hit me...fatigue.  It came fast and hard, uff.  I slowed my pace and JayP rode away.  I took in more food and fluids.  About an hour later I was feeling great and back at it.  But it was too late.  Making up that kind of ground on someone like JayP would prove to be very difficult! 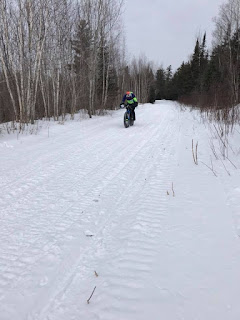 Seeing Elephant Lake is always a great feeling.  Just across the lake awaits the checkpoint.  Unlike Gateway, I planned to stop to fill up my hydration bladder, grab some food, and change some clothing.  Getting there early, without the crowds of other racers, makes it easy to get in and out.  It was a cold year however and I had some wet clothing I need to address.  I made short work of getting fluid and food...yes I had a grilled cheese sandwich, despite it not being vegan!  I swapped out my headgear (headband and neck gaiter), gloves, and a base layer.  I was there just shy of 14 minutes.  I was shooting for 10 but oh well. 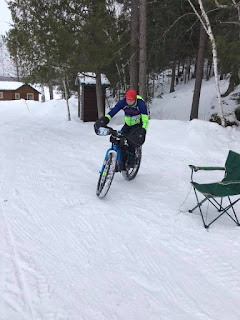 Starting back on the bike I was shivering pretty hard but a mile or so down the trail I as feeling the best I had all race.  The next section to Surly Checkpoint (mile 110) is my favorite. I love the swampy areas we go through and actually enjoy the big hills (which most are walkers).

I felt pretty good all the way to Surly.  I stopped but didn't need any fluids (which is all they are allowed to have).  I put in some music and hand warmers in my gloves and was off. 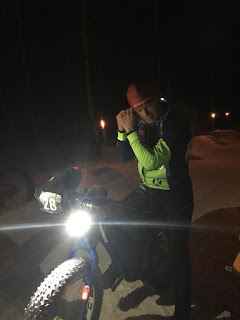 Surly is an outside checkpoint.  Music going in for the last 25 miles.
Photo Credit: Jen Doom

Shortly after leaving Surly my hands started to go south.  I was able to bring them back from numbness and/or cold all of the race.  But they had had enough and quit.  I had my hands in a fist, inside of my gloves, around a heat pack, inside of my pogies.  They ebbed and flowed a bit between how shot they were but they were bad enough I was unable to drink the last section of trail.  I did stop and get some food into me.  It was comical trying to get a sleeve of shot blocks out.  At one point I tried going in like I was bobbing for apples.  I did manage to get a sleeve and pop a few in my mouth.     Further down the trail it started to get cold, real cold.  I flipped my Garmin from the map page to the data page.  It showed -25, and this particular Garmin runs 5-10 degrees high!  Brrr!  Later on I wondered about getting my down coat on but decided against it.  With the state of my hands I figured it would take me too long to get it out and wasn't even sure if I would be able to zip it.  Crush the pedals was the only choice.

Finally the lights of the casino glowed around the corner and the orange snow fence led the way.  Before the last little rise there was a Yeti jumping around.  Plus there were some snowmobiles coming up behind me.  In the state I was in I was wondering WTF was going on! 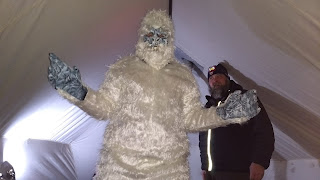 Proof there was a Yeti!

Turns out it was my friend Tom in the Yeti costume and he was getting the attention of the snowmobilers as they were horsing around and seemingly unaware of me.  Thanks Tom!

At the finish I was shelled.  I've never finished one of these races shivering.  I was cold. 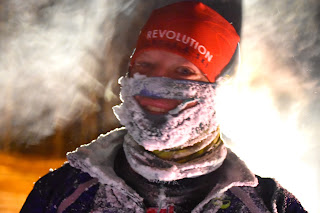 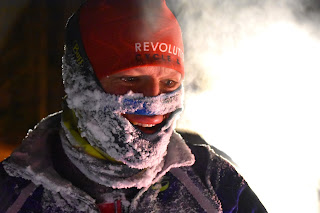 Checkout the puffy lip!  It was fine.  Only a little frostbite on my cheek and nose.
Photo Credit: Dave Markman 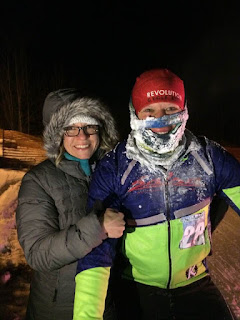 Can't do these races without Jen!
Photo Credit: Sarah Stone

I had somewhat of a paparazzi at the finish.  I was a bit dazed and just wanted to get inside.  Once inside Jen ripped off my cold layers and fished out my down jacket.  As a top finisher (2nd place) I am required to show the officials that I carried all the required gear.  Finished in 14:12, Jay was 13:16, just a minute of the record of last year.  Great race Jay! 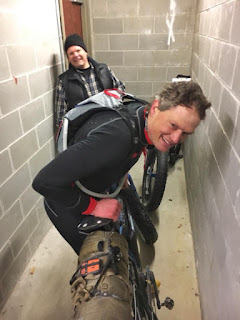 Man that was hard.  I was slow moving.  Thankfully the volunteers did most of the work!
Photo Credit: Mike "kid" Reimer of Salsa Cycles

After inspection it was off to the hospitality room where the shivers and shakes took full affect!  I had people putting warm towels around me, extra down coats, taking off my boots, adding a sleeping bag, and getting me coffee.  I like being pampered!

I'm stoked with how the race went.  Sure I wish I could have stuck with JayP longer, maybe even make him a bit nervous, but I had a great race, came out with minimal frostbite in a -30 race, and had fun.  Plus there is always next year!

Thanks to everyone that makes this such a great event: the race directors, the volunteers, the fans, my family, and other racers.  Good stuff.

On a side note: upon hearing of our house fire, Ken and Jackie Krueger (race directors) offered to replace my lost AH135 trophies.  Classy.  Thanks so much!
Spewed by Ben at 8:57 AM