Wow. Not even too sure where to start. From the time Jen and I left our house on Saturday around 5:00 pm to our return today, (Tuesday) at about the same time, it feels an eternity has gone by. So I will give it my best. I have had a few hours, or so, to think about what I wanted to say but those thoughts have come and gone!
I will intertwine some pictures with words. 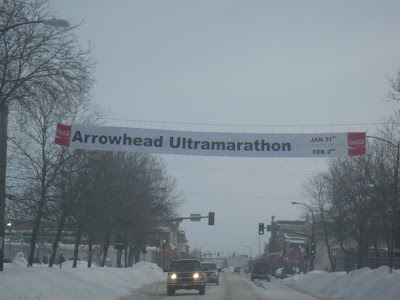 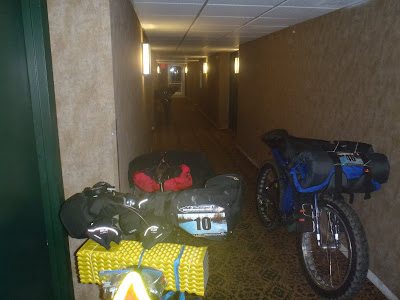 Race morning the hotel hallways were filled with snow bikes!
The race started at a chilly 7 am. Per usual I started at the back, hoping this would allow me to ride my "own" race. Immediately there was a cluster in the hole shot so I was off my bike waiting. Once riding I fell in line behind others. Again, me being me, I got frustrated at the speed (either too fast or slow) and the cluster of riders jostling for position. So I picked my pace and rode it. I passed when needed and let others pass me as needed. The snow conditions were overall pretty good. They received 8" of snow Friday and Friday night. Overall they have way more snow than us! But the trails had been groomed in spots and/or ridden in by snowmobiles. 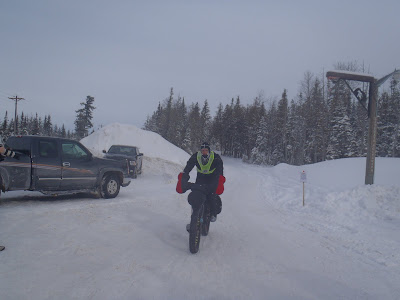 Coming into the first checkpoint, mile 37.

My hydration pack had froze so I was reduced to drinking out of my bottles. This required me to get off my bike. This stop was at a gas station. To this point no one stopped but I ran in and got a Gatorade. Slammed it too fast and got brain freeze, ha more cold. I came in 7th and left 8th. To this point the trail had been pretty flat and mostly fast. Oh that was about to change. 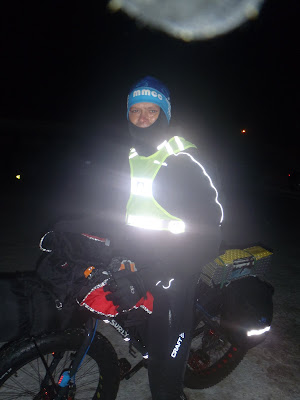 O.K. this is out of order but this is at the race start. 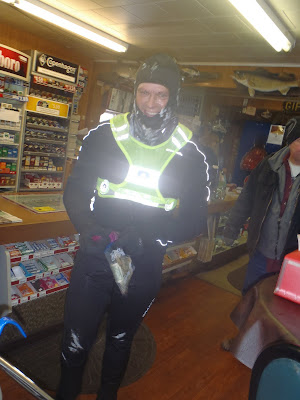 See? This is me buying my Grape Drink.
From checkpoint 1 (mile 37) to checkpoint 2 (mile 72) I was by myself the entire time. I did pass the rider that left the first checkpoint before I did but that was it. I was ok with that. It was still day light out and I was able to just ride. The course changed from flat to hills but nothing bad, at least I think. I knew the checkpoint was at Melgeorges resort on Elephant lake. I kept waiting for that lake to show up on my GPS. That's how I passed the time. With a 2 miles sign to the resort I was stoked. 2 miles, however, on a snow bike can feel like an eternity. 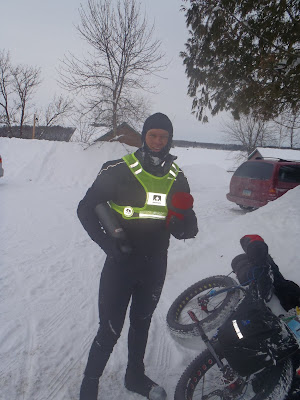 At the second checkpoint I came into the cabin to four other riders taking in food and drying out. I was in need of a new undershirt and a swapping out of socks. I was starting to get cold as the temp was dropping. It was now about 4 pm. After a change of some clothing and eating some of the best tasting food (grilled cheese and wild rice soup, oh baby) it was time to go once again.

Next checkpoint was at mile 110, or so I thought, it was 115, and that played with my mind. Did I miss the checkpoint, was constantly going through my head. But alas I did not and there was the Crescent Bar. But before getting there I had to go through the most hilly section of the race. It was ridiculous. I rode many of them but had to hike a bike many of them too. I caught myself a few times trying to shift gears while pushing my bike...doesn't quite work that way! I played games with myself. I would make it 3 more hills before I would check the mileage or listen to 6 songs before checking the time.

I was pretty tired and sore. My lower back started to hurt right at the start, but standing and pedaling helped to relieve that some. My right knee started to hurt during this section. Clipless pedals have float while the platform pedals I was using made it difficult to move my foot around with the spikes on the pedals. On my longer training rides I was happy that my lower neck/upper back had not been acting up...but yeah get 12 hours in and things start to happen. The tights I was wearing as a base layer started to tear at my butt cheeks. I was starting to fall apart! Mentally I think I was still ok but ready for the checkpoint. On one of the steeper hills I ran into Charlie Farrow. He too was ready for the hills to be done and assured me it got easier. I was now running in 6th. After riding by myself in the dark for so long to see the lights of the Crescent Bar was a warming feeling. 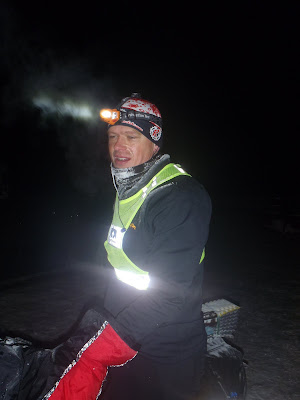 I had a cup of soup and a pulled beef sandwich while chatting with the other two riders there. They were warming by the fire. I was ready to be done, it was now 11 pm. I decided not to stay too long. It gets to a point if you stay too long you need to stay till everything dries out or you will freeze...at least for me. Not sure on the exact time but I was in and out pretty fast. One rider had left about a minute ahead of me while the other (Lance) stayed to ride with Charlie. I truly didn't care if I caught Josh (the rider in front of me) or not. I hoped to just catch sight of his flashing lights to remind me I'm not out there by myself and as motivation. You know, the carrot in front of the donkey. Well that was not too be. Josh drilled it and sucked it up. Charlie didn't lie it was flat but almost too flat. My back was killing me, my ass was raw, and my feet were starting to freeze. No matter what I did I was very uncomfortable on the bike. I switched to harder gears and stood to pedal. I got off the bike and ran, well sort of. I fell over once, that bike was heavy! Josh finished 30 minutes in front of me! Awesome. I didn't care, seeing the lights of Fortune Bay was an awesome sight. 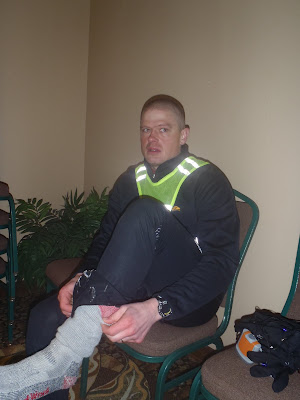 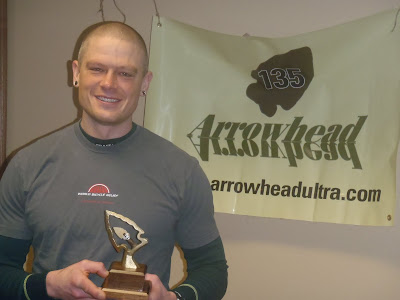 The next day trophy shot.

So that's it. I will talk later about my gear and what worked and didn't work, etc.

I will say that this is the most "beat up" I have ever felt after any race I have ever done. I am sore, stiff, and tired all over.

A big thanks to Jen for following me to every stop and staying up the entire time! Thanks too for the great updates on FB.

Awesome job! I was following your progress online and couldn't believe for many riders dropped out. You are hardcore as shit!

Tenacious T said...
This comment has been removed by the author.
10:34 PM

very inspiring. I have many races planned but none as early in the season as the Arrowhead. Great Job!

Nice job! what's next the ghost trail? a little iditabike action! haha jk, but if you do I'll be following that too! I think it's time for you to hit the sauna!

nice work, B! your ability to ride smart is really impressive- and the top 5 is outstanding.
and Jen is great, too.

Nice work Ben; Becs and I were sending you sauna, tail wind, and downhill thoughts to ease the pain...
The Hackensacks.

You, Benny, are a rockstar. I am super proud of you. Nice job!
Deb

I would have had you get me a pack of smokes if I knew you were stopping at a gas station. This is a great accomplishment. Way to go.

Great to see you made it safely to the finish line! 19 hours is a long time on any saddle. Enjoy your recovery time and give us a shout if you want to sit in a small room @ 180F-200F!

Nice job Ben. You worked damn hard!
That should really be a good base for the upcoming road racing season! (I'd put one of those smiley face things here but I think its kind of weird.)
Anyway well done.
C

hey Ben great read, the reason you didn't see any tail lights is because i shut it off. I was running scared and could not risk dangling the carrot. I also noticed your frozen water bottle and guessed you were stopping to drink. My shit was also frozen and i had to stop as well. I rode for well over an hour and a half just to make sure you wouldn't catch me. Every time i looked over my shoulder i was sure i would see your head light, you looked like you were in better shape than i was at crecsent. thanks for the push and congrats on an excelent finish. sicerly Josh aka Death Rider