Last weekend was my 5th (I think) time doing a race on the Tuscobia Trail in WI (running between Rice Lake and Park Falls).  As predicted the start was rather chilly, about -15 or so, according to my Garmin.  My new Garmin, 1030, tends to be on the high side while my older Garmin was low...weird.  There was very little fanfare before the start and we were off.  I jumped to the front to control the pace.  I didn't want to go out crazy fast and sweat myself out.  I put down a 10-12 mph pace.  The trail was ok but when it's that cold the snow and tires act like velcro.  About 2 miles in I pulled off to let the group pass.  I was surprised to see it was I and just one other (I think David Ristau).  There were still many lights back but it was hard to tell if they were gaining or dropping.  About a mile later I was back up front.  I took the turn from the connector trail to the Tuscobia Trail and noticed there was a big gap now from the front to the next group.  David stopped to adjust his clothing as he was overheating.  I didn't know this but was informed by Dan Lockery when he came around me a bit later.  I didn't know Dan was there.

I've ridden with Dan several times before.  While I don't know him super well we seem like similar guys.  We ride about the same pace, are ok riding in silence, and are cool with waiting if another rider has to stop.  Thus I was stoked it was Dan it looked like I would be riding most of the day with.  After Dan's pull I was back up front just keeping a steady pace.

During Dan's pulls I found myself slipping back.  I was busy focusing on my hands.  My hands go numb (fall asleep) early on in rides but I'm usually able to bring them back.  I was struggling with them early on.  The cold temperatures exasperated the situation.  Going into Birchwood, 16.5 miles, Dan was up front.  The majority of the elevation seems to be in section.  I struggled to keep up as my hands were almost useless.  Leaving the backside of Birchwood Dan had a big gap and I wouldn't see him again till the Ojibwa checkpoint, mile 45.

I did get my hands to come back around, but it was short lived.  The temperature continued to drop as the sun started to peak over the horizon.  My Garmin showed -20 below.  I've had my hands hurt pretty bad before but this seemed different.  They were now numb and cold.  I was a bit concerned with them being numb I wouldn't be able to properly judge how cold they actually were.  Because I was so focused on my hands I neglected to be diligent about drinking my hydration mix (Infinite Nutrition Go Far).  Yep, it froze.  No matter, my hands were more clubs than anything so unzipping my jacket was a small miracle in itself.
When my hands get cold I tend to pull the fingers out of the finger holes and make a fist inside the glove, which is inside a pogie with hand warmers.  I was trying to get my fingers back into my left glove but having a hell of a time.  My glove actually came off.  I had to stop and get my glove back on ASAP.  If anyone would have saw how hard it was for me to do they would have laughed.  Ridiculous!

Finally the Ojibwa checkpoint was coming into view.  Quitting definitely entered my mind.  My hands were really messed up.  Enough so that it was scaring me.   My original plan for the first checkpoint was to be in and out.  But with my current situation I needed to take my time and assess my hands.  Per usual the volunteers were top notch.  Seemingly more so at this event as most are racers at some point themselves.
I never sat down but stood by the fire or  propane heaters warming my hands.  As the blood started to flow back into my digits the "screaming barfies" started in.  Man that is some pain!  I also worked on my hydration, getting it unfroze.  My hands came around enough that I deemed it safe to push on.  Plus the sun was up and warming the air.  I left Ojibwa at 11:15, I was there 30 minutes.  Dan left about 11 minutes ahead of me.  To get back to the trail from the checkpoint we have a few hundred yards to navigate.  By the time I was on the Tuscobia I was shivering pretty good.  I debated whether I needed to go back or not.  I pushed on.  About and hour later I was unzipping my jacket from being too warm!  It was -12...ha!  Gotta love the sun.

Eventually I started to see the 80 mile riders coming towards me.  This is one of the reasons I like this event.  Despite being mostly flat and straight you have ample opportunities to see other living things! It's always a boost to see fellow riders.  Because of the rising temperature, the onslaught of fellow riders, and seemingly improving trail the 35 miles into Park Falls seemed to fly by.  Near the end of the trail I was able to catch back on with Dan and we rode into the checkpoint together.  I was feeling much better and enjoying myself.  I made quick work at the checkpoint: topped of my water, added more mix, slurped a bowl of veggie soup, and grabbed some Twizzlers while heading back out....11 minutes.  Dan left at 2:42.

I wanted to take advantage of the sun hence my rush to leave the checkpoint.  However the sun was already on it's way down and not as effective as it was.  I left the checkpoint at 2:38.  My jacket had thawed while I was in the checkpoint.  Back on the trail is froze stiff!  I was only able to get my zipper halfway down.  Enough, however, to access my hydration hose.  I was cognizant to drink every 10-15 minutes to prevent freezing, which worked!

With the setting the sun so went the temperature.  I'm not sure how warm it got but the warmest I saw on my Garmin was -3.  I was now back to dealing with my hands once again.  About 2 hours from Ojibwa my hands were basically shot.  It got to the point I could no longer operate my zipper or grab any food.  No matter what I did I was unable to revive them.  It was a long push, mentally and physically, into Ojibwa.  Once again quitting was on my mind.

At Ojibwa (I got in at 6:15, Dan was 6:37) I needed help getting my jacket off!  This time I set my butt in a chair in front of the fire.  My first cup of coffee I had a hard time not spilling.  Gotta love winter racing!  The coffee tasted so good that I had 3, maybe 4, cups.  More on this later.  Slowly and painfully my hands came back to normal once again.  I was taking my time however.  I was drying out my socks, adding a base layer, putting on new head wear, ditching the gloves for mittens, 2 chemical hand warmers in the pogies, and using the puffy coat, as my race coat (Podiumwear Arrowhead jacket...da bomb!) was soaked.  I did manage to find some food too.  Since going plant based my options were limited.  The grilled cheese looked so good but opted for peanut butter and jelly with crushed potato chips.  Cause yeah, thats so much healthier!

I left almost an hour and half later, at 7:27, one of my longer checkpoints from any race.  Almost immediately I was warm!  I actually had to unzip and rode with my hands on top of my pogies!  I loved it.  I was unable to put down a fast speed however.  The trail wasn't all that great as there was a decent amount of snowmobile traffic.  Plus the temp was cold again making the trail velcro like.  An hour or two after leaving Ojibwa my coffee caught up to me.  I had to go to the bathroom and not the stand up kind.  I fought the urge but the urge was winning out.  I came across a tiny path off the Tuscobia trail.  It was go time.  I worked my way 50 feet off the trail.  Found a  discrete spot others wouldn't stumble upon...hopefully.  Let me tell you, taking a dump in the winter while layered with cycling gear in -13 degree temps is interesting.  I had to take off the puffy coat, hydration back, one base layer, suspender on my 45NRTH pants, take off my bib tights, then bib shorts.  Finally it was business time.  FYI...if you find some Darn Tough socks 50 or so feet off the Tuscobia trail I'd leave them.

Back on the bike I pushed the speed some to get the blood flowing to warm back up.  Thankfully it worked.  I was able to keep my hands in check for the duration of the ride.  My feet started to go some but nothing too serious. I finished in 18 hours 29 minutes (Dan took 2nd with 19 hours 17 minutes) for the win!  My first win at a ultra fat bike race!  Man it felt good to be done. 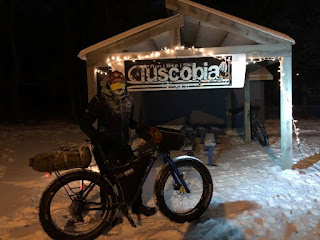 The temperature was weird.  I've been in colder temperatures but not with such high humidity.  Many racers, myself included, were getting soaked due to the high humidity.  Making the already cold temperatures feel much worse.  I heard reports it got down to -27 but that's not official.  With the cold temps, high humidity, and poor trail conditions the finishing rate was the lowest in Tuscobia history, 37%.  Just finishing the race was a win.  But knowing when one has to quit is also a win.
I'm still dealing with some tingling in my right hand, which isn't uncommon after so much saddle time.  I am working on my position and other things on my bike to hopefully limit my hand numbness.  But it's something I've always had, more so since having broken bones in my hands and/or elbow.  Getting old!