Yesterday I couldn't head out for a ride until I got Harper to gymnastics at 9.  I was out pushing the Cutthroat pedals by 9:30.  The wind was strong out of the NE.  Upon leaving my plan was to make it to the Milaca Wildlife Management Area on the East side of Hwy 169.

The wind and Benton County gravel had me going at a snails pace.  I wasn't "feeling it" either, mentally and physically I was struggling.  The wind seemed more North than anything so I altered my plans to head further North and checkout Oxcart Road, which is part of the upcoming Freedhem 76 course.  Once or twice I changed my mind back to the original plan but ended up with sticking with the Oxcart option.

My attitude and body took about 1.5 hours but they both came around and I was cruising along...feeling good and happy.

Oxcart road is a minimum maintenance road used primarily by ATV's, it's a great road.  It was running very well.  The deer/horse flies were insane however!  I'm not sure I've experienced them any worse.

I altered my return route some to coincide with the Trans MN Route.  They were coming up through Little Falls to Camp Ripley.  I would need to refuel soon so I opted to head West a bunch and jump on the route. A buddy doing the race was in Little Falls, I at Camp Ripley.  I figured we'd meet in the middle.  However there is a spot where there are two options and I took the road I always take.  They took the other.  We missed each other!

I was able to slowly bring the average speed up with the now tailwind, albeit lower than when I started.  It's funny how different I felt at the start versus now.  I really felt I could have ridden through the night.  Although I know once the sun sets it's a different game. 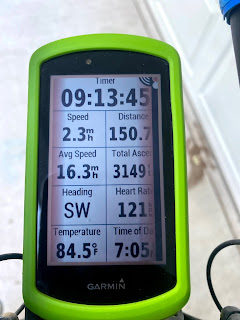 The Ride.
Planning on 30-40 miles this morning, maybe the same Saturday, and race Sunday.  I'm also hoping to sleep in a bit, like past 6!