Unbound XL is getting close, first weekend in June.  The problem with having more than one (or two) bike that would work for the race is deciding which bike to use.  I've done the 200 on a Surly Long Haul Trucker (canti version) and the Evergreen.  I also used the Evergreen on the XL.  The Evergreen was the likely choice once again.  But I keep going back to the Cutthroat.  I can run a bit bigger tire (still deciding) and I have a bigger gear choice.  Plus it's a damn comfy bike.  The hang up has been the Evergreen seems faster.  But I'm leaning towards the Cutthroat.  Comfort trumps speed in 350 miles for me.

Knowing this I've been spending more time on the Cutthroat.  Friday, Saturday, and Sunday were all on the Cutthroat.  The wind Saturday was S/SE!  I haven't been on the Dirt Bag course all Spring!  It was time.  A bit over an hour in I ran into Onyx Jim.  We rode together the next hour and half before he had to head for home.  That was a nice reprieve from just my and my brain!

Not wanting to do the last section of the DB around Lake Sylvia and beyond I deviated from the course and headed south on gravel roads.  Just before Cokato, or Dassel...not sure, I headed back north to connect back with the DB route. 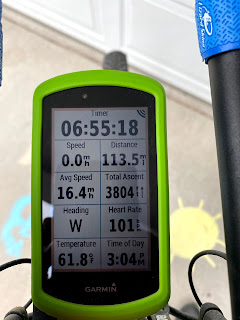 The Ride.
I felt really good on the ride.  No pains and everything appeared to be clicking along the right way.
Sunday I got up with Toby and let everyone sleep in, mostly Jen as it was Mother's Day.  We had caramel rolls and hung out a bit.  Jen said I should go for a ride.  You don't have to tell me twice!  The wind was back to a Northernly direction.
I headed up to Gillman.  Benton County has "freshened" up their gravel so it's rocky, chunky, soft, etc.  So perfect for the Cutthroat.  The wind was much stronger than I anticipated.  I didn't have my Garmin on the data screen but I must have been going 13-14 mph.
At Gillman I headed North on Cty Rd 3 a bit before making the move East and South...tailwind. 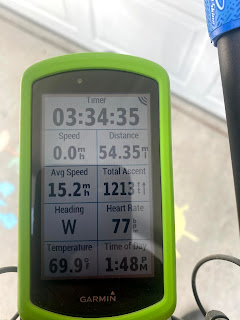 The Ride.  Slow but good.
Friday morning we got a call from Harper's school.  Someone in her class was exposed to Covid.  Thus she too had been.  She has to quarantine for 10 days.  If she gets tested, she did yesterday, and gets a negative result, still waiting, she can go back on the 12th.  So I am home with her today.  My plan was to get up early and ride but not "having" to get up had me scheming of ways to ride later.  The plan is to roll out this afternoon...on the Cutthroat to the North!