Saturday was hot and muggy.  While not my favorite riding weather I don't hate it and it's good timing if I hope to get acclimated to the heat before Unbound XL.  I headed out around 7:30 on the Cutthroat.  S/SW winds were pretty strong already at the start.  I decided on Darwin once again, trip #5, but took a different route.  I went further South, flirting with Hutchinson, before crossing Hwy 15 and making my way back up to Darwin and the Ball of Twine.

I popped the 100oz bladder into my hydration pack, previously 70 oz, before I left.  Good thing.  By the time I hit Darwin I was ready for more.  Couple Gatorades, liter of water, and a Coke later I was good to go.  I stayed East of Powder Ridge before making a push West.  The tailwind was amazing but created many "dead zones"....so hot! 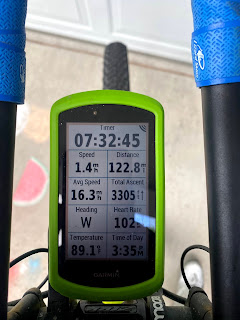 The Ride.
Sunday I had to work so I was up and out riding before 7:00.  This time on the T6 Rando.  The winds were E/NE, more East, so I headed out straight East on pavement.  It was super thick.  I was sweating instantly. It felt more like Mid August that May.  But by the time I passed Foley the wind picked up and the dew points fell, almost instantly.  I got a bit chilled!
On the way home I took gravel with now whipping tailwind.  I got home early enough I didn't have to rush off to work, which I enjoy. 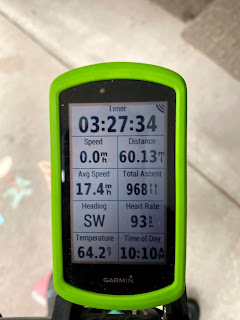 The Ride.
So racing...
I'm not feeling it anymore.  I love riding and will always ride but I'm not so sure how much racing I will do anymore.  I'm even contemplating bailing on Unbound XL.  Maybe it's because I ride a bunch already being gone for races seems too much?  Maybe I put too much pressure on myself?  Or maybe I just don't want to race anymore?
Unbound is falling at a busy time for us.  Brinna is graduating and work is busy.  Grad party stuff needs to get done and bikes need fixing and to be sold.
What to do?!