Monday and Tuesday were gorgeous days to ride.  At least in the morning.  Tuesday afternoon clouds rolled in and started to spit rain every so often.

Tuesday I met up with Jim to so some mountain biking.  We met at the River Bluffs, which we rode, and continued on to Plum Creek, the Dirty Beaver, Race Track, North Loop, and Friedrich Park.  Fun times. 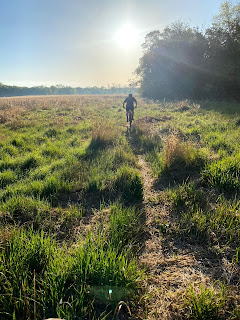 Jim riding the Field of Dreams.  It's more of a winter loop so this trail will mostly be grown in soon.
Wednesday I woke up to wet roads.  It's so humid they are taking forever to dry out.  I headed out on the Evergreen once Harper was on the bus.  The bike got a little dirty and I hit some mist but not bad.  I did the Silo (shortened) Loop.  It rained a most of Wednesday evening.  Thursday was looking meh.
A scan of the radar and hourly forecast Thursday morning made it appear I had a 3-4 hour window.  Not my typical Thursday ride but better than not.  I started out on the Dirt Bag course but skipped some side loops in favor of going further South, into the wind.  Mostly so I'd have more tailwind on the way home and to switch it up some.  About 1.5 hours in I hit rain.  It wasn't bad so I figured I had time to make my turnaround point, basically Maple Lake.
I made the turn and the skies opened up.  I stayed on gravel as much as I could as it was soaking up the rain.  It rained solidly on my way back.  I and the bike were pretty messy.  About 45 minutes from home it had stopped and the roads were back to being ok.  I figured the damage was already done so I headed back South for more.
I basically did the start of my Darwin Loop but cut it short and came up to Powder Ridge from the South and stayed West of it.
About an hour in from when I turned back South it started raining again.  Not as long as before but much harder.  Even the gravel roads were becoming saturated, thus messy and SLOW! 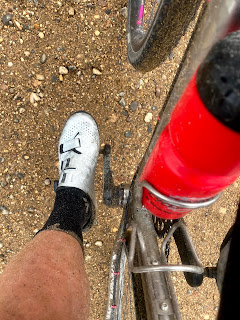 It didn't come across as well as I hoped but I and the bike are covered in gravel.  This is before the second round of rain.  We got worse.
My 4 hour ride turned into 6.5, so yeah...I got my 100 in.  Ha!  I went straight to the back yard and hosed myself and the bike off.  The Evergreen is already in need of a new BB so I wasn't too stressed of riding in the rain. 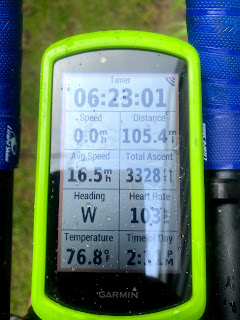 The Ride.
The plan is to do and easy Silo Route this morning.  More South winds.  I'll take the T6 Rando and spin.  Saturday we are flirting with 90 degrees and high humidity.  A good day to try and acclimate to Kansas heat!