Monday morning we were in a deep fog.  Not wanting to be out on the roads with poor visibility, I hit the dirt.  While it hadn't rained there was a thick layer of dew over everything.  I got and the bike got lots of spray from the tires.  I kept it to the SE side, so the Race Track, North Loop, and Friedrich Park.  I kept it a chill ride at 1.5 hours for 15 miles.

Tuesday I had off from work.  It was sunny but crazy windy, 15 mph with gusts later hitting 40.  Once again I took the Cutthroat and headed down county road 8.  The wind was SW, later moving to mostly West and NW in the late afternoon.

I made my way to Kimball before I made my push West.  I stayed South of Hwy 55.  Several sections of gravel had freshly laid gravel.  Combined with the previous nights rain and the headwind I wasn't setting any speed records.  Eventually I hit Lake Koronis.  From a previous trip out this way I knew where a Casey's gas station was, which was perfect as I was getting low on fluids.  After topping off I headed North of Hwy 23 and made my way back East.  Much easier this way!

On a bit of a time crunch I took a bike path for part of the way, making great time.  I needed to get home to get Harper and head over to the High School and get ready for the senior parade.  The seniors decorate up their cars (we had Jen's mom's convertible) and drive through the parking lot to cheering teachers and staff.  It was pretty cool actually. 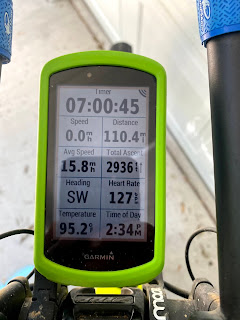 The Ride.  The temp isn't correct as it was in the sun.  It was more like 85 degrees. 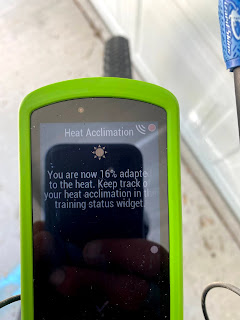 Another 8% increase! Ha.
The NW winds did come and cooled things off dramatically.  It's still windy as well.  Another day for the dirt!